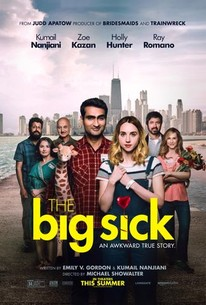 Join us Monday October 2nd @ 7:00 pm at the Aurora Cinema Centre for the based on real life romantic comedy ‘The Big Sick’.  Ticket sales will stop at 6:55 pm so our film loving volunteers can see the beginning of the movie.  Tickets are $13.00 each or $55.0 for a flex pass for 5 films.  Don’t forget to bring cash as the theatre’s ATM is not always working.
Synopsis: Kumail is a Pakistani comic who meets an American graduate student named Emily at one of his stand-up shows. As their relationship blossoms, he soon becomes worried about what his traditional Muslim parents will think of her. When Emily suddenly comes down with an illness that leaves her in a coma, Kumail finds himself developing a bond with her deeply concerned mother and father.
Rating: 14A coarse language
Trailer