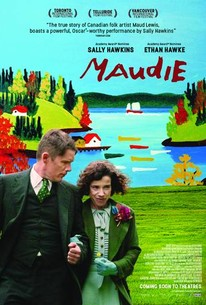 Join the Fort St. John Film Society Monday May 8th for ‘Maudie’ starring Sally Hawkins and Ethan Hawke at the Aurora Cinema Centre.
Monday May 8th @ 7:00 pm.  The cost is $12.00 per ticket, don’t forget cash as the theatre’s ATM is not always working.  Ticket sales will stop at 6:55 pm as our film loving volunteers like to see the beginning of the film.
This is our last film of the season- THANK YOU to everyone that joined us at the movies this year!
Synopsis:  In Nova Scotia, Maud Lewis (Sally Hawkins), who suffers from severe arthritis, is hired as a housekeeper by reclusive local fish peddler Everett Lewis (Ethan Hawke).  Despite her crippled hands, Maud yearns to be independent and to live away from her overprotective family, but most of all, she wants to create art. An unlikely romance blossoms between herself and Everett, as she determinedly hones her skills despite her pain, and overcomes the physical challenge of juvenile rheumatoid arthritis.  She eventually rises to become one of Canada’s premier folk artists, whose paintings hang in The White House.