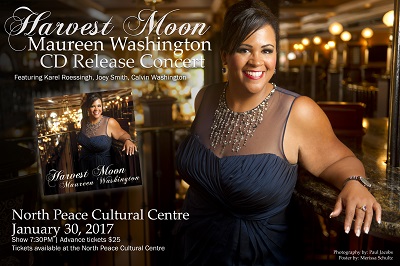 Maureen Washington slips easily from sassy to sexy within a single line of lyrics, at times echoing the haunting tones of Etta James and Carmen McRae. She exudes the impish irreverence of Jann Arden and the vocal agility of Holly Cole, yet Maureen’s musical style remains distinctly her own.

Maureen began her musical career in Prince George, British Columbia. Now based in Victoria, British Columbia, Maureen is blessed with a growing fanbase as she performs with duos, sextets, and solo artists. She’s also had the honur to sing back-up on Canadian Folk legend Valdy’s 2011 album, Read Between the Lines.
Maureen is excited to be releasing her ninth album Harvest Moon. She will be bringing some of the west coasts finest musicians with her!
Karel Roessing – Piano, Joey Smith – Bass, and Calvin Washington – Drums