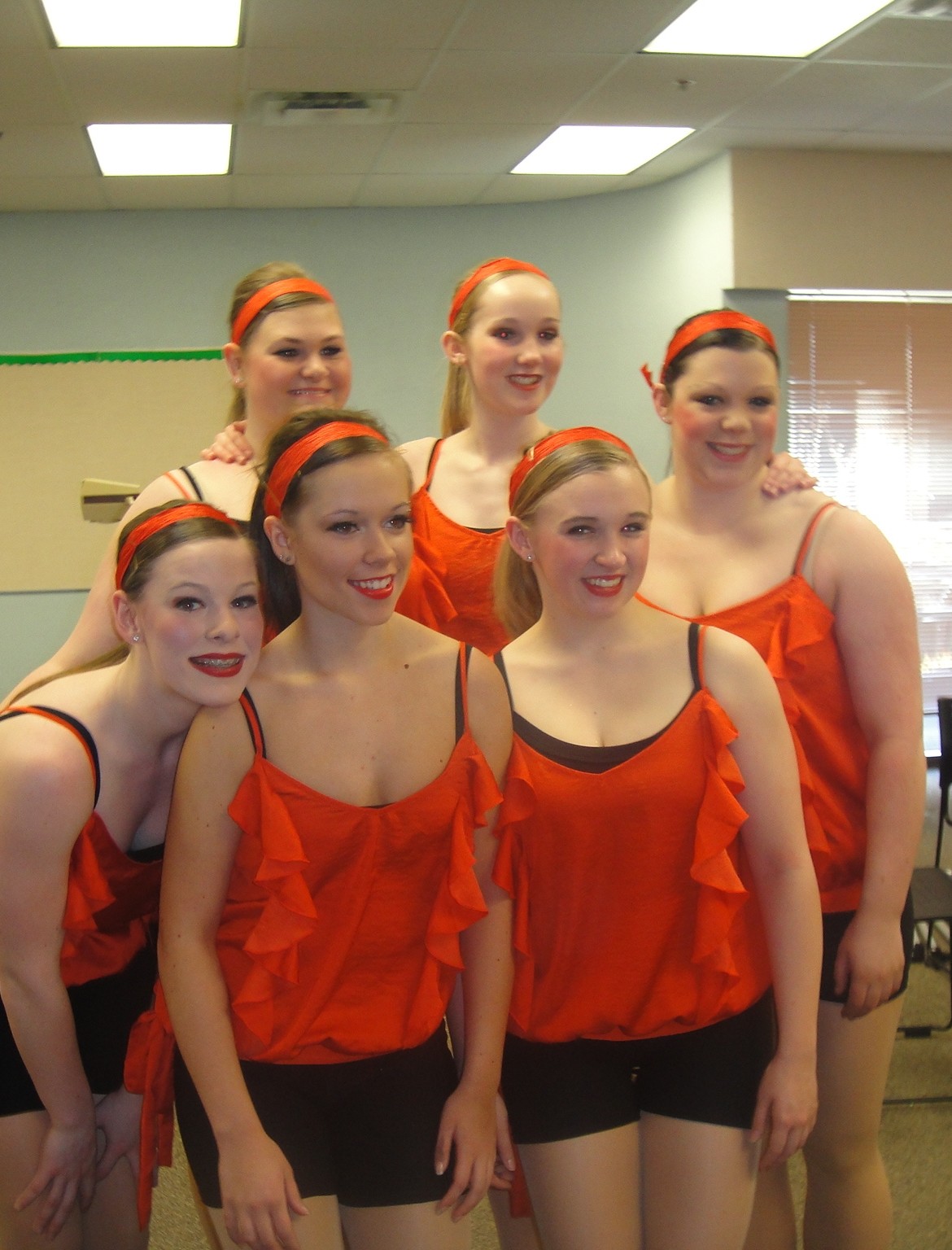 Six graduating students will be featured at the Studio 2 Stage Spring recital on Saturday, May 12 in two shows at 2:00 and 7:00 pm, the largest graduating class at that dance studio since 2005. They will be dancing in their final recital as members of Northern Dance Theatre Society and as full time students at Studio 2 Stage Dance Academy.

The girls have studied a variety of dance forms, including ballet, tap, jazz, contemporary and acrobatic dance, completing the highest levels of examinations and competing in many festivals over the years. This group of senior dancers has ended their time at Studio to Stage on a high note with a very successful festival season, winning numerous group and individual awards. The Recital will feature the lyrical group, "Something in Red" which won trophies at every festival, including the top overall group award at the Peace River North Festival. Also on stage one last time will be the Most Entertaining number from the Peace River North Festival, the Bollywood/jazz number, "J'ai Ho", which is one of the most exciting numbers the dancers have ever done and will be a great finish to their time at the studio.

The girls will miss all of the friends that they have made at the studio and wish all of the younger dancers the very best in the future. They also thank their teachers, Shauna Milne, Amy Beard, Stephanie Baker and Emry Ziprick for all of the support and encouragement over their years at the studio.

Karleigh Smith:  Karleigh has been dancing from the age of 3 and is the third and last member of her family to graduate from the Studio 2 Stage full time program. Karleigh has won many awards at festivals from a very young age and has represented the region in ballet and modern dance at the provincial festival several times. Along with her considerable skill as a dancer, Karleigh has a wonderful natural acting ability. She is known for her individual style and the personality she brings to the stage. This year she won the "Light up the Stage" award at the Peace River North Festival, "Love of Dance" at Sherwood Park and an award for overall achievement in Grande Prairie. In performing a hilarious tap number with her father, Kevin, at the festival, she truly marked the end of an era at Studio 2 Stage.

Shannon May:  Shannon joined the studio at the age of 4 and, along with Karleigh, was one of the first of the group to join the competitive troupe. Shannon has loved her time with Studio 2 Stage and appreciated the opportunity to develop her dance skills over the years. Shannon has been selected to attend the Provincial Festival many times and has also been chosen to attend summer school at the Royal Winnipeg Ballet School and National Ballet School in Toronto. Last years she achieved the Advanced II level in the Royal Academy of Dance Ballet exams. She has finished with a wonderful year, being awarded an adjudicator's choice award at Sherwood Park, the Adjudicator's award as the top overall dancer at the Peace River North Festival and the Top Soloist award at Grande Prairie. Shannon plans to further her dance training at Arts Umbrella in Vancouver next year.

Amanda Frankham:  Amanda has been one of the hardest working dancers at the studio and, through sheer determination, has also become one of the most accomplished. She also has achieved her Advanced II in ballet through the Royal Academy of Dance along with her gold stars in Jazz and Tap. Amanda is known for her strength and commitment to her dances and her jazz numbers always wow audiences with the power and height of her jumps. Amanda has been a dedicated member of the troupe and spends many hours in class as a teacher as well as in her own classes. Her ambition is to have her own dance studio and everyone who knows her believes in her ability to achieve her dream. Adjudicators showed their respect for Amanda's dedication to dance by awarding her the "Love of Dance" trophies at both the Peace River North Festival and in Grande Prairie.

Rebecca Reed:  As with Karleigh, the graduation of Rebecca marks the end of an era at Studio 2 Stage as the youngest of a studio dance family. Rebecca has always brought a love of dance and a dedication to the group that has earned the respect of her group over the years. With dancers sometimes learning more than 20 competition dances every year, learning and remembering choreography is always a challenge and Rebecca earned a reputation for knowing every detail of every dance. The best possible teammate, Rebecca has always supported and encouraged other members of her group and generously appauded their individual successes, so it was with genuine joy that the group celebrated some long overdue recognition for Rebecca at their final festival in Grande Prairie. She won a most promising award with her jazz solo, an outstanding with her variety duo with Karleigh and an overall adjudicator's award for her achievement at the festival.

Carly Dick:  Carly joined the troupe in 2007 and brought with her an infectious enthusiasm and pleasure in performing that always raised the spirits of the whole group. Although Carly came to dance a bit later than some of her fellow dancers she quickly developed her skills and became a valued member of the group. She has a natural athleticism which, along with her dedicated hard work, gave her a high level of control and strength in her dancing, although she was possibly best known for her powerful and exciting tricks in acrobatic and jazz numbers. Carly was frequently recognized by adjudicators for the quality of her dancing and she was awarded an adjudicator's award for achievement at the Grande Prairie festival. Carly showed her creativity by choreographing all of her own solos this year and she plans to take that creative ability into a career in design after graduation.

Melynda Bergen:  Melynda came to the troupe late, joining the group only in the last two years. She came to Studio 2 Stage after reaching the highest level of achievement in Highland dance. Her skill in this genre translated well to the disciplines of ballet and jazz and Melynda progressed quickly to become a valued member of the group. She progressed quickly and was able to was able to complete examinations in her new disciplines, including such advanced technique as ballet en pointe. She had always dreamed of performing a pointe dance in a classic tutu, but, unfortunately her final year of festival was hampered by a foot injury that kept her from dancing many of her solos. She dance through the pain as best she could, however, and was able to be part of many of the award winning group numbers.