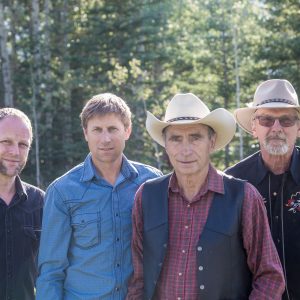 The Wardens don’t just sing about the land, they’re part of it.

The Rocky Mountain-based band’s stories and songs rise from the very land they’ve protected as Canadian national park wardens. With haunting three-part harmonies and chilling tales, the band’s mountain music – blending folk, roots and western styles – reflects Canada’s protected wilderness areas. Celebrating the return of wild buffalo, wrangling grizzly bears, lonely nights on the packtrail and reflecting on an environment in crisis, a performance by The Wardens has been dubbed “the quintessential mountain-culture concert experience.”

Following the 2021 release of their third full-length album Sold Out at the Ironwood, band member Ray Schmidt was nominated Traditional Singer of the Year by the Canadian Folk Music Awards. The band has also received numerous regional nominations including Touring Artist of the Year by the BC Touring Council and Album of the Year by Country Music Alberta.