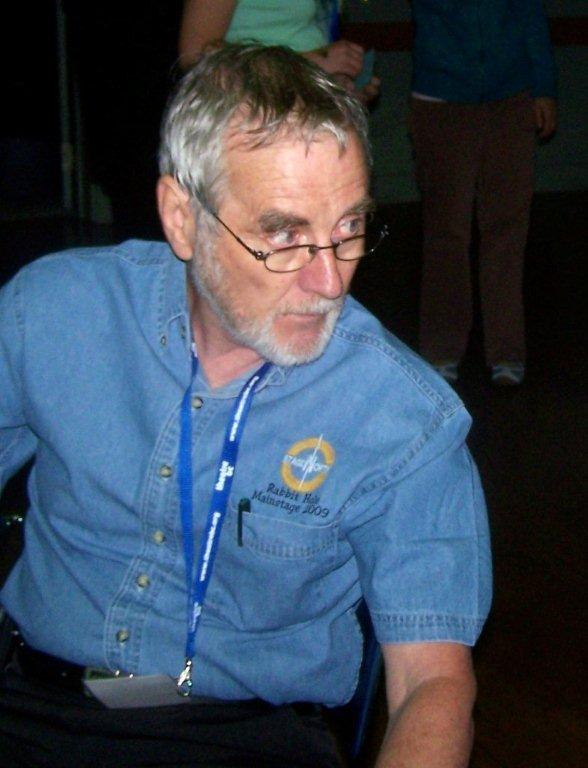 A memorial for Tony will be held on June 27 at 2:00 pm at the Cultural Centre.

The arts community in Fort St. John is mourning the loss of Tony Atkins who died June 11, 2015, in the Fort St. John Regional Hospital with friends by his side. Since the late 1960’s, when he moved to Fort St. John from Australia, Tony was a teacher, a Principal, a member of the Peace Valley Environmental Association, a supporter of the Child Development Centre, a founder of the Community Arts Council and a consistent production crew member of theatre productions in the community.

Tony first volunteered with Workshop Players as a character actor in children’s plays staged in school gymnasiums. He chose acting roles that had the minimum of lines to learn and a few roles required no speaking at all.

He later joined Stage North as the director of the lights and sound department and set construction crew. Stage North relied on Tony to help design and commander the construction of the stage sets. He organized a number of moves when Stage North found new rehearsal and storage spaces. He could pack an amazing number of props and amount of construction materials into a very small space. He spent much of his time after retiring from SD#60 working in the set shop at the Stage North Space. It will be very hard, if not impossible, for Stage North to replace him.

Tony was one of the founding members of the Community Centre Committee formed in the early 1970’s to obtain a permanent arts centre in Fort St.

Tony was always ready to give wise advice and to help with a worthy cause.

He never needed a reminder nor an extra nudge to get the job done. Tony will be missed by everyone in the arts community. As both a financial contributor to the arts and a donor of much of his volunteer time, Tony was a rare combination of the perfect member of a number of organizations in the arts.